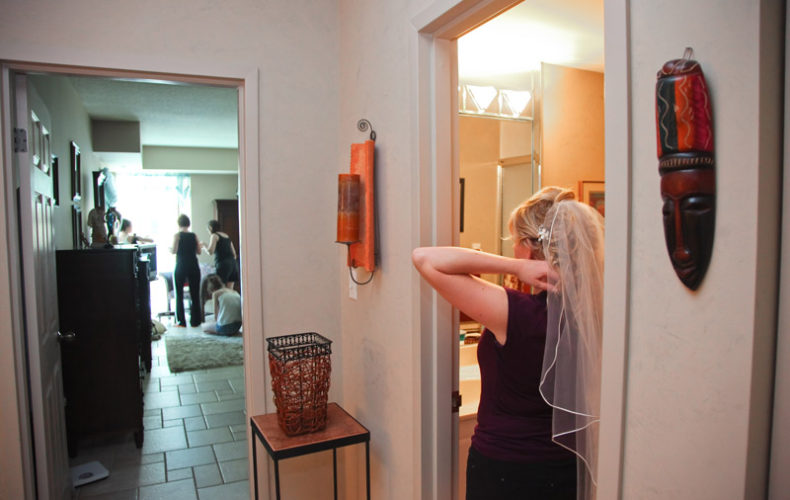 Had the pleasure to photograph Lyndsay and Scott in Ottawa for their engagements a year prior. And go to know them that day walking around the market and the Hill. So when it came to the day of their wedding I was looking forward to it as their personalities and my style of photography work very well together and I think fit to a T.

The day of their wedding was sweltering! Thankfully the church had air conditioning or we all would have melted! I think the humidity level was one of the highest I felt in a long time!

Traditionally I photograph the guys getting ready first, but today was a bit different as Lyndsay was less than a km away from where I lived at her Grandparents condo and Scott was very close to the church where his parents place was in Woodslee. After the ceremony the humidity decided to produce droplets of water, it wasn’t really rain, as it felt more like someone turned a misting machine on and off. Weird.

Back at his parents’ house the decision to stay close instead of heading towards Belle River Marina was the best made that day. I asked if they wouldn’t mind trudging into the hay field and both Lyndsay and Scott accepted with smiles! Awesome! As I’ve always wanted to get a bride and groom in a hay field and this one was close to prefect!!

Back at the house, guests enjoyed cold bevies and good company! As time passed, the heat didn’t let up at all and Scott mentioned his grandfather’s old barn across the way. So off we went and grabbed some very memorable photos from him and the family.

The night continued in Belle River at the St Simon & St Jude Hall with some great laughs including karaoke singing for kissing during dinner.

Congrats to you both!
Cheers
Trevor